Where a revived Crosville dominates the Somerset resort 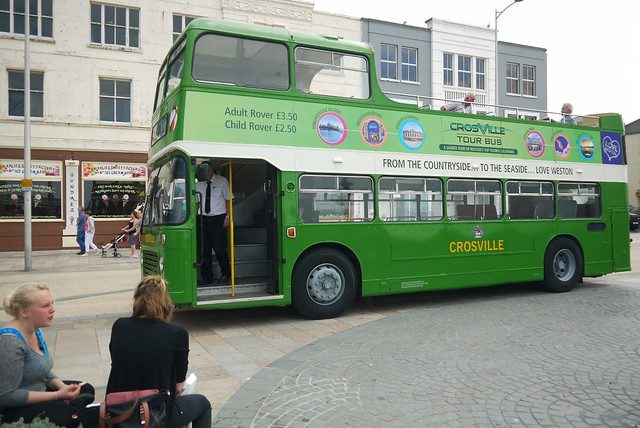 For five days, the genius behind East of the M60 was holidaying in the West Country resort of Weston-super-Mare. Yours truly was baffled as to why a proud Cestrian name was seen on the streets of Weston which inspired this year’s look at bus operations in the resort.

In Weston-super-Mare, there seems to be a duopoly between First Bristol, Bath and the West and… Crosville Motor Services. Yes, the Crosville name most famously associated with North Wales and parts of Cheshire. There is also a regular service to Burnham-on-Sea operated by Webberbus with connections to Bridgwater.

Previously, most of Weston-super-Mare’s buses have been operated Badgerline and its predecessors. Owing to tender changes at North Somerset Council, FirstGroup had retreated from most services in Weston, apart from the 7, 121 and 126 services. Their link with Bristol city centre remains popular and has been the subject of recent investment.

In Weston-super-Mare, the Grand Pier, Winter Gardens and Regent Street is the town’s main stopping points. What passes for a bus station is a National Express terminal on Francis Ford Road opposite the railway station. Both are a taxi ride away to your hotel if you’re carrying suitcases (advisable owing to the walking distance).

The Grand Pier stop is probably the closest stop Weston has to a bus station; the shelter is of higher construction standards compared with bog standard shelters in the vicinity. With the lack of a proper bus station, this may be daunting for visitors new to the resort. Not least finding timetable information anywhere besides the Tourist Information Centre or the library on Walliscote Grove Road.

First Bristol, Bath and The West

FirstGroup’s flagship service in the resort is their express service to Bristol city centre which takes 65 – 75 minutes to get to the city’s bus station. The 1 is the limited stop sister, prefaced with ‘W’ on FirstGroup’s website to avoid clashing with the 1 services in Bristol. Both the 1 and X1 have modern vehicles with dedicated route branding.

Local service, operates every 20 minutes on weekdays and Saturdays then every hour after 1900 hours. Every 45 minutes on Sundays till 1913. Again prefaced with ‘W’ on FirstGroup website to avoid clashes other 3s.

Local service, operates every 12 minutes on weekdays then every 45 minutes after 1900 hours. Every 15 minutes on Saturdays, half hourly on Sundays till 2001. Again prefaced with ‘W’ on FirstGroup website to avoid clashes other 7s.

The 121 is one of two services to call at the Helicopter Museum and offers a link with Bristol Airport. There is six return journeys along the full route on weekdays and Saturdays (eight up to Bristol Airport, nine from Wrington to Weston-super-Mare). Its Sunday and Bank Holiday service is operated by Bakers Dolphin.

The second bus to the Helicopter Museum continues to the picturesque Cheddar village, and the small yet perfectly formed city of Wells. It operates hourly from 0550 to 2040 on weekdays and Saturday. Its Sunday and Bank Holiday service is more limited – four return journeys every three hours from 0800 – 1940.

Webberbus operates two services from their Bridgwater depot, which is one hell of a distance from Weston. These are 26 and the 76. In recent history, they won a few North Somerset Council contracts for the 4, 4A, 83 and 85 services. Problems with reliability saw the Bridgwater lose its contracts with the 4 and 83 both operated by Crosville Motor Services.

The resort’s second bus to Wells is operated by the Bridgwater company. There is advertised connections with the 76 service from Burnham-on-Sea. Buses to Wells operate every hour from Weston-super-Mare to Wells with the first trip from Regent Street departing at 0735 and its last return journey being at 1655. 73 minutes is allowed for the journey. There is no Sunday and Bank Holiday service.

The timetable for the above route offers advertised connections with the 75 service from Bridgwater to Burnham-on-Sea. Passengers would change over at the latter point. The service is hourly on weekdays and Saturdays with the last bus leaving Weston at 1813. Again, no Sunday and Bank Holiday service.

I was simultaneously baffled and amazed to see an old Cestrian name along the streets of Weston-super-Mare with buses using a livery more akin to SHMD’s final livery. North Somerset’s Crosville is a relatively new name, but their pleasant buses add a bit of colour to the local bus scene. The livery is actually more reminiscent of Bristol Omnibus than SHMD, or the original Crosville of Cheshire and North Wales fame.

Most of their services finish after 1900 with all but a handful having Sunday and Bank Holiday journeys.

Few people would know that Weston-super-Mare is one of the few places where you can board Bristol VRTs in stage carriage operation. Crosville’s seasonal 152 service does just that in the summer months with heritage vehicles in use – including open top Bristol VRTs. Whereas all stage carriage services in the resort accept ENCTS passes this one doesn’t, being classed in the same sort of clause as an excursion. Though it serves the main attractions, it lacks the scenic credentials of its sister open-topper, the 100. The seasonal service has six journeys which came to a close this week.

This local service offers a half hourly connection with Weston General Hospital on Mondays to Saturdays. It is one of two former Webberbus services.

This local service offers a hourly connection with Weston town centre and nearby Worle on Monday to Saturday. There is nine return journeys on Saturdays and school holiday weekdays, but seven return journeys on weekday schooldays.

Another shoppers’ service with ten return journeys on Monday to Saturdays, again hourly. This serves a new housing development just off Somerset Way.

Today, Crosville Motor Services is the only operator of this route that links Sand Bay with Weston-super-Mare, via Birnbeck Pier. There was previously competition with First Bristol, Bath and West. Marketed as the Coastrider, open top and covered double decker buses feature, usually Alexander bodied Volvo Olympians in the former. From Monday to Saturday, it operates half hourly.

It also has a Sunday service, albeit with shorter operating hours whilst being half hourly. The section north of Birnbeck Pier (somebody get a move on with its restoration, please…!) up to Sand Bay is its most scenic part. Well worth the trip!

This useful route terminates outside the hospital grounds of Uphill and is only the second Crosville route to have a Sunday service. It operates every half hour on weekdays and Saturdays. A recent tender win from North Somerset Council will see its Sunday service operated by Crosville with five journeys and two part route workings from Weston to Uphill.

As with most parts outside of the Metropolitan areas and London, there is a lack of evening services, with the exception of FirstGroup’s routes. Most of the resort’s bus patronage probably comes from the tourist trade rather than local passengers. Given the way the town’s retail space and housing is planned, Weston-super-Mare seems to be a delight for car owners, though less so for bus users.