Or: how the school computer became my gateway drug to all things of an 8-bit nature. 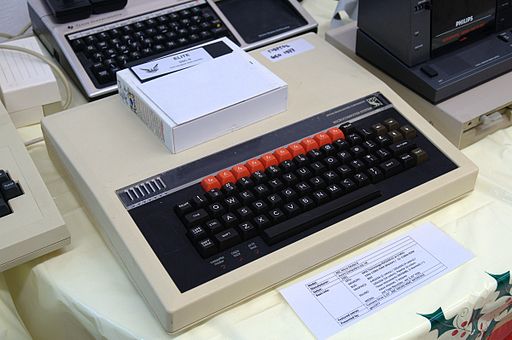 If you know a thing or three about 8-bit computing, you would have come across the excellent drama, Micro Men (starring Alexander Armstrong as Sir Clive Sinclair). Or, you might have had first-hand experience with a Commodore 64, ZX Spectrum, or an Amstrad CPC. Even if you didn’t have access to a microcomputer in the home, you would have had first-hand experience at school.

If, like I, Stuart Vallantine, happen to be a Child of the 1980s, you will have come across the BBC Micro. From the early to the late 1980s, the BBC Microcomputer was everywhere on the Beeb’s two channels and its radio stations. The reason? Her Majesty’s Government wanted to boost computer literacy rates, and part of the plan included a computer system that tied in with a series of television programmes.

There was competition for the lucrative contract, and all three frontrunners had had dealings with Clive Sinclair at one point or another. One was Newbury Laboratories, whose personnel had dealings with Clive at Science of Cambridge, with the Grundy Newbrain. Then there was Sinclair Research; they hoped the ZX82 – the ZX Spectrum – would have been the winner on price, in home and school environments.

In The X Factor or Britain’s Got Talent tradition, you could have said the runner-up did better than the winner. Not quite. Sinclair Research’s ZX Spectrum sold 1 million units by Christmas 1983 and proved to be a hit with households. The BBC Micro – the winning machine, by Acorn Computers – carved a niche in educational markets. The last BBC Micros came off the production line in May 1993.

Both entrants would succumb to a downturn in the computing industry in 1984, plus production issues (the Sinclair QL’s unreliability and the late arrival of Acorn’s budget priced machine, the Electron). Acorn Computers were taken over by Olivetti, and Sinclair’s computing division was sold to Amstrad.

In 1985, this eejit began his computing adventure at Yew Tree Primary School, Dukinfield. I have Chris Curry and seeing odd clips of Micro Live in my formative years to thank for this.

The BBC Model “B” computer and its peripherals

On seeing the system, I was amazed. It seemed like the bees knees, even with 32k of RAM and an internal speaker instead of sound coming through your TV screen. Still, it was good enough for the programs I was familiar with at the time. The text and colour graphics already seemed familiar to me, thanks to teletext-based systems. (Yes, yours truly was wowed by the fact it was like watching Pages From Ceefax).

Another joy of the BBC microcomputers was its expandability. You could also get a teletext adaptor, being as the BBC microcomputer range supported teletext and viewdata systems within its system (which came under Mode 7). The main accessory for Beeb users was a composite video or RGB video monitor. The ones I remember were the Microvitec CUB monitors. They were very boxy yet the clarity was superb. Today’s HD pictures are just as crisp. Using a television to play computer games seemed like supping double Laphroaig in a plastic cup.

Being as my only experience of BBCs came from scholastic leanings, I never got to play Elite, Exile or Repton 2. Nor use a cassette recorder to load games. The norm at school was a 5.25″ disk drive, and pretty fast they were as well. There was either the 40 track single density disk, or the 80 double density disk. Some floppy drives would have a 40/80 switch to allow for the double density floppies.

To make the system complete was three important peripherals. One was a graphics overlay tablet, which allowed you to enter complete words with an overlaid sheet. Another was a light pen, often used for letter formation.

The crowning glory of the three was quite a beast. The obligatory, yet noisy, dot matrix printer. Whereas the C64 and ZX Spectrum computers required a Centronics interface for many printers (other than any of Commodore’s or Sinclair’s proprietary printers), the BBC had one from the start. Adorning many a school computer trolley was the Epson FX-80. It was a noisy, yet reliable 9-pin dot matrix printer, with punch holes on either side of the paper for its tractor feed.

1986: 128k of RAM: now you’re talking…! The BBC Master Computer, owing to its rugged looks and sturdy case, endeared me to the Beeb even more. From 1987 to 1996, this was the version of Acorn’s machine that I knew best. It had the reassuring bleep on starting up (like the Model “A” and Model “B” systems) and its backward compatibility.

Less visibly (though I never got to dabble with this myself), there was a built-in utility suite on a ROM chip. Without a floppy disk drive (though you needed one to save your work), you could use the Master Computer’s built-in spreadsheet and word processor. Which, if I recall, was very limited. This was also a feature of Commodore’s less-successful Plus 4 computer.

The BBC Micro’s programs made learning fun for me. I was, and am very much, a visual learner. The timing of Acorn’s machine couldn’t have been better.

No mention of BBC Micro programs is complete without Podd. Softech Systems’ creation (resembling the head of Sad Sack from The Raggy Dolls) enabled you to control him via simple commands. For example, ‘pop’ would see it explode; ‘dance’ would see Podd whistling to a jolly tune; plus, entering ‘leap’ or ‘jump’ would see Podd jumping in the centre of the screen.

Then there was Granny’s Garden, a graphical text adventure that featured a raven and a cottage. Granny’s Garden is among the BBC Micro’s celebrated educational titles. This would have been played as a special treat, for doing well in class.

Among the educational games I remember, though not by title, included one where you had to identify a pattern of shapes on a horizontal line. You had to complete the sequence of shapes (often triangles or circles) and/or colours. Successful completion of one line was met with high pitched whooping.

There was also a ‘simulator’ which simulated the ‘proper’ way of getting dressed in the morning. You had this wire framed picture of a boy (goddamn gender stereotyping in 1985!), and his clothes were represented in wire frame format, with different colours for each garment.

The BBC also did well with television tie-in software. Not only of the popular quiz shows but also – mainly, owing to its prominent niche – numerous programs tying in with BBC and ITV schools’ programmes. ITV’s computer programs were promoted by the Sherston and SEMERC software houses till the early 1990s.

As well as maths and English games, it was also a boon for doing school work. One of my favourite peripherals was the Robin light pen. The Educational Software Company’s peripheral was used for letter formation programs, either in upper or lower case forms. With the program I used at the Ewing School (Lord rest its soul!) the Robin Pen would fill the letter in red.

Word processing was a feature, albeit a world away from the MS Office and Google Drive packages of 2016. The main program I recall was Folio. This was compatible with the 32k and 128k BBCs, and offered different modes for banners (thanks to the wonders of tractor-fed printer paper in concertina fashion) newsletters or standard type-written documents. This was set in a sober, easy on the eye, light blue background.

For the 128k machines, there was Interword. This was a professional word processor, contemporaneous with Wordstar, Word Perfect, Tasword, and Mini Office 2. There was also Interbase and Interspread within the same suite of programs (database and spreadsheet programs respectively). All three programs were also available for Amiga computers.

Furthermore, its word processors also supported tablet keyboards. In almost the same way you enter text on an iOS or Android device, it could ‘scan’ text written on A4 paper. This was the digital equivalent to a sentence building folder.

As well as its productivity software, another great joy of using the BBC Micro was programming. At school, this was through a programming language known as Logo. Acorn’s Logo package was a stepping stone to bigger things. Like BBC Basic, or 6502 machine code. One joy of Logo is how its programming language requires a degree of mathematical thought. Especially knowledge of angles and pixel lengths. For instance, FD50 means Forward 50 pixels.

The Acorn Archimedes and other machines

By the time I moved to comprehensive school, the computing scene changed again. The BBC Micros were being replaced by Acorn A3000s and Archimedes PCs, their 32 bit successors. I loved working with the Acorn’s RISC OS user interface, though missed the Beeb.

Even so, the BBC Model B, Master 128 and Master Compact PCs would be seen in many schools around the UK, till I left in 1995. A great many still adorned computer trolleys in my sister’s years at comprehensive school, immediately after I left.

So, what happened next? Alongside the BBCs and Arcs at All Saints, I gained a great interest in the 8-bit and 16-bit computers. Now I spend most of my life in front of one, for personal and professional uses.

Even in 2016, one part of Acorn’s vision is merely feet away from my chair.

It’s my digital tablet. Without Chris Curry and Herman Hauser, your iOS or Android device wouldn’t share its DNA with Acorn’s RISC OS. Nor could its ancestry go back as far as the Model “A” and “B”.

Is there any way I could play Elite or Repton 3 on my smartphone a la BBC Model B style?

One thought on “Memoirs of a BBC Micro Maniac, Aged Six”