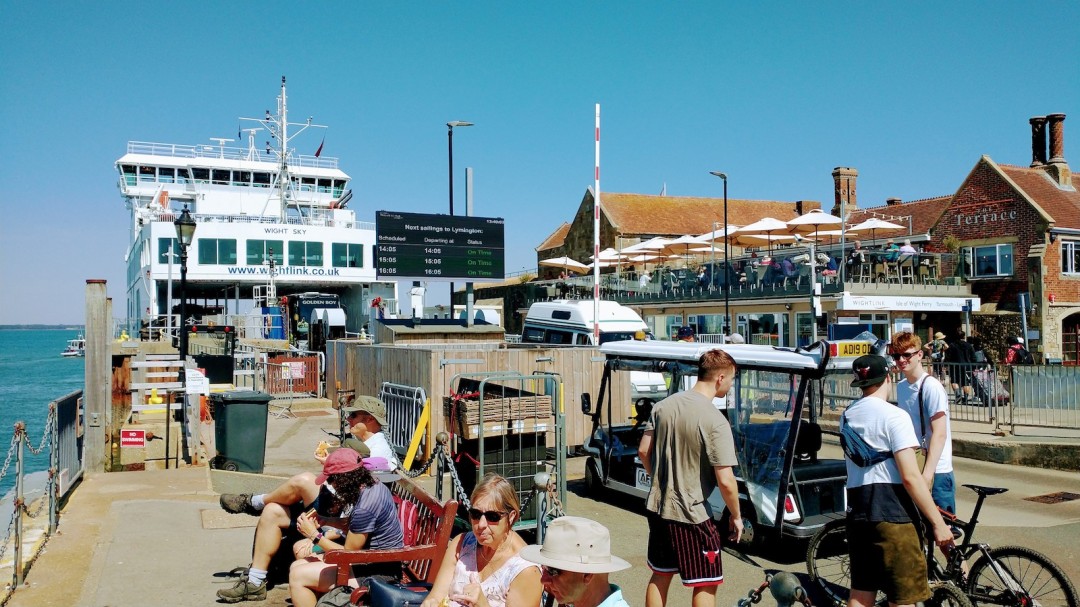 The Wight Way To See The Isle of Wight: Now You Know What I Did This Summer, 2022

The British Isles has more than 6,200 islands. As well as the mainland, this includes the Channel Islands, Western Isles and the Isle of Man. South of The Solent is the Isle of Wight, up to an hour on Wightlink and Red Funnel ferries from Southampton, Lymington and Portsmouth.

The Isle of Wight has a proud history linked with Queen Victoria, the Earl of Mountbatten, and its sailing heritage. It has amazing scenery, chalk cliffs and a dozen shades of sand on its perimeter. On a clear day, you can see the Needles cliffs from Swanage. It has also been a home for J.B Priestley and Lord Alfred Tennyson. In 1970, home to Jimi Hendrix’s last ever gig and one of Supertramp’s first ever gigs at that year’s Isle of Wight Festival.

In addition to Cowes Week and rock music, it has a lot to offer transport geeks of all ages. Where else could you ride on the only scheduled hovercraft service in the world? Where else can you take a London Underground train to the UK’s oldest pier? Did you know that the same town with ex-Tube trains to its pier has a great bus museum?

In this year’s Now You Know What I Did This Summer, we look at the buses, trains, and boats on our favourite diamond-shaped island. Sit back, relax, slap on the sun tan lotion and cast your mind back to our record-breaking summer weather.

There are several ways to cross The Solent from the mainland. From Lymington, you can take the Wightlink ferry to Yarmouth. If you’re staying on the western part of the Isle of Wight, this is the one for you. Wightlink also run the Portsmouth to Fishbourne and the Ryde to Portsmouth ferries.

Whereas the Yarmouth and Fishbourne ferries take cars and coaches as well as foot passengers, the Ryde ferry only takes foot passengers and cyclists. This is because the Ryde Pier ferry uses the landing stage at Portsmouth Harbour station and has catamarans instead of conventional ferries.

If you’re travelling by train from Sandown to Stalybridge, your fare covers the ferry crossing. Furthermore, its two catamarans (Wight Ryder I and Wight Ryder II) take 22 minutes from the Isle of Wight to the mainland.

Wightlink operates most of the Isle of Wight’s ferries. It was spun off from Sealink’s successors Stena Line. Sealink was privatised in 1984, hitherto the British Railways Board’s ferry services. Their pride of the fleet is Wight of Victoria, an electric hybrid ferry that entered service in 2018. It is their largest ferry with six decks and coffee bars on two levels. It has three open decks, which proved to be a godsend in scorching conditions.

The Island’s other main ferry operator is Red Funnel Ferries. Their sailings depart from Southampton and arrive at West Cowes and East Cowes. Originally known as The Southampton, Isle of Wight and South of England Royal Mail Steam Packet Company Limited, it was founded in 1861. From Southampton, the West Cowes ferry (foot passengers only) takes you to the Isle of Wight in half an hour. The East Cowes ferry takes double that time and carries vehicles.

On weekends, Solent Cruises do a cheap crossing to Portsmouth at £10.00 a pop (or £9.00 for senior citizens). As well as car ferries, Solent Cruises not only offer another way of crossing The Solent. They also do pleasure cruises. On Wednesdays and Thursdays they do a non-landing cruise to Portsmouth taking in the Naval Shipyard. There is also a Portsmouth Harbour tour from Gunwharf Quay.

The only scheduled hovercraft service in the world!

A few yards away from Ryde Pier is Hovertravel‘s terminal. It is home to the only hovercraft service in the world, taking 10 minutes to get to Southsea Hoverport. Its uniqueness does come with a price: £28.00 for a Day Return (or £18.60 for concessions and senior citizens). Therefore, if you choose to take a trip on the hovercraft and happen to have a senior citizens’ pass or Young Auties’ Travelcard*, you could get a neat discount.

The Island Line is unique in that: 1) it is the only Network Rail line to finish at a pier; and 2) it uses electrified former District Line trains. In 1967, the line was electrified with 1930s London Underground trains supplanting tank engines. By the late 1980s, a new generation of late 1930s Underground trains took over. Earlier this year, they were replaced by late-1970s/early-1980s D78 District Line trains.

The present Island Line rolling stock was converted from Metro-Cammell D78 rolling stock by Vivarail. Its ride, which I experienced from Lake to Ryde St. Johns Road (and Ryde Esplanade to Sandown on the way back) was smooth though a little bumpy in parts. Compared with the Class 150 Sprinters I am used to, a fair improvement. With the late not-so-lamented Pacer units, a massive improvement. Seating is good, though taller passengers may be best using the longitudinal seats instead of the backward or forward facing ones (legroom is a little tight where backward and forward seats face each other).

Like the StalyVegas Shuttle, Island Line trains are once hourly and have two cars. Sometimes they might have four cars – like their diesel peers in the Tameside area. For £6.70 you can use the trains to your heart’s content with an Island Line Day Ranger. For a modest supplement you can add the Isle of Wight Steam Railway to your ticket.

At Smallbrook Junction, you can change over to the Isle of Wight Steam Railway. This 5 mile stretch finishes at Wootton with an additional stop at Havenstreet and a request stop at Ashey. Passengers can also sit in First Class as well as Second Class. The Suggested Itineraries section is well worth a look.

The Isle of Wight has a lot to offer for bus enthusiasts. As well as a great bus museum in Ryde, its routes give you the best view of the Island (the front seat upstairs is well worth bagging).

Most of the Island’s bus routes are operated by Southern Vectis. They are part of The Go-Ahead Group’s Go South Coast operation, which has won plaudits for rejigging Bournemouth’s bus network, 48 hours after the demise of Yellow Buses. The company operates five seasonal routes and, under their Community Bus Partnership, it works with Parish Councils and Town Councils to provide socially necessary bus routes in rural areas.

Though Southern Vectis has a virtual monopoly on the island, there is one exception to the rule with the 31 route from Ventnor to St. Lawrence. This is operated by Minibus-Plus.com, a private hire firm in the same mould as Nexus Move in Oldham and Tameside. It has seven circular journeys from 9.45am to 1pm on Tuesdays and Fridays. This is supported by Ventnor Town Council and – to Southern Vectis’ credit – features in their printed timetables.

Another local operator is FYT Bus. They operate minibus services in Freshwater, Yarmouth and Totland (which is what FYT stands for). Two routes are in operation: Route A is a circular one, taking in Yarmouth and Freshwater. On weekdays it has three hourly journeys in the morning. Route B is another circular with the same frequency: this one begins at Freshwater, taking in Totland Bay and Colwell Bay.

For their mornings only routes, the return fare is a most attractive £2.50. Compared with Greater Manchester’s bus fares – even with the forthcoming £2.00 single fare cap – an absolute steal. Under 14s can travel free of charge and they also take ENCTS concessionary passes for people with disabilities and senior citizens.

FYT Bus also offer door-to-door services for hospital appointments, offering a real alternative to private hire taxis. They also have a charity shop which is open from 10am to 4.30pm on weekdays (and from 10am to 1pm on Saturdays). That is two doors away from their office, both on The Broadway in Totland.

If tourism didn’t account for a quarter of the Isle of Wight’s economy, its buses wouldn’t put Greater Manchester’s to shame. As well as all-year-round services, the island is blessed with seasonal routes.

All seasonal routes in operation from 01 May to the 01 October. The Needles Breezer is in operation till the 30 October. ENCTS concessionary and senior citizen passes not accepted on the above routes.

Though used to real time information and digital timetables, I was happy to see approachable staff at the island’s bus stations in Ryde and Yarmouth. Better still, I was glad they didn’t dispense with paper timetables or treated them as an afterthought.

The transport geek in me was happy to see a wealth of colourful maps and timetables which went beyond printing the times. As pocket guides for tourists and people new to the area, they add value to the guides. In all, they help to make the bus a mode of first resort instead of last resort. Coupled with their publicity material and decent evening frequencies, Southern Vectis’ well turned out fleet makes me want to get their buses even more. (How I wish I could say the same in my part of the world).

If you wish to do things the right way Isle of Wight way, you can see a lot of the island on its bus network. Its frequent evening services and seasonal open top buses is the island’s piece de resistance. With plenty of ferry options – foot passenger or motorist – it is quite easy to get to from the mainland. If you’re travelling on public transport, it is worth keeping your eyes open for coach and train fares that include ferry crossings.

Though the rail network is nowhere near as extensive as it was 60 years ago, never mind a century ago, there is a lot to like. Especially the unique selling point of ex-London Underground trains taking you to seaside piers. Apart from the novelty value of riding on ex-District Line rolling stock, the Island Line is the fastest and most relaxing way of getting from Ryde to Sandown. Going off the loadings I saw on my journeys, there’s great potential for an half hourly service.

Will I go again? Most certainly. During my week away, I still didn’t get to see all of the island’s treasures – or board more of its bus routes.

Stuart stayed at The Bayshore Hotel in Sandown with Alfa Travel. His holiday included excursions to Ryde, Yarmouth, the Needles, Cowes, and Osborne House. For more details about their short breaks and holidays, you can find them on AlfaTravel.co.uk.

Our thanks go to David Gibbs for providing us with additional information on the Isle of Wight’s tourist attractions and Southern Vectis bus routes.

One thought on “The Wight Way To See The Isle of Wight: Now You Know What I Did This Summer, 2022”