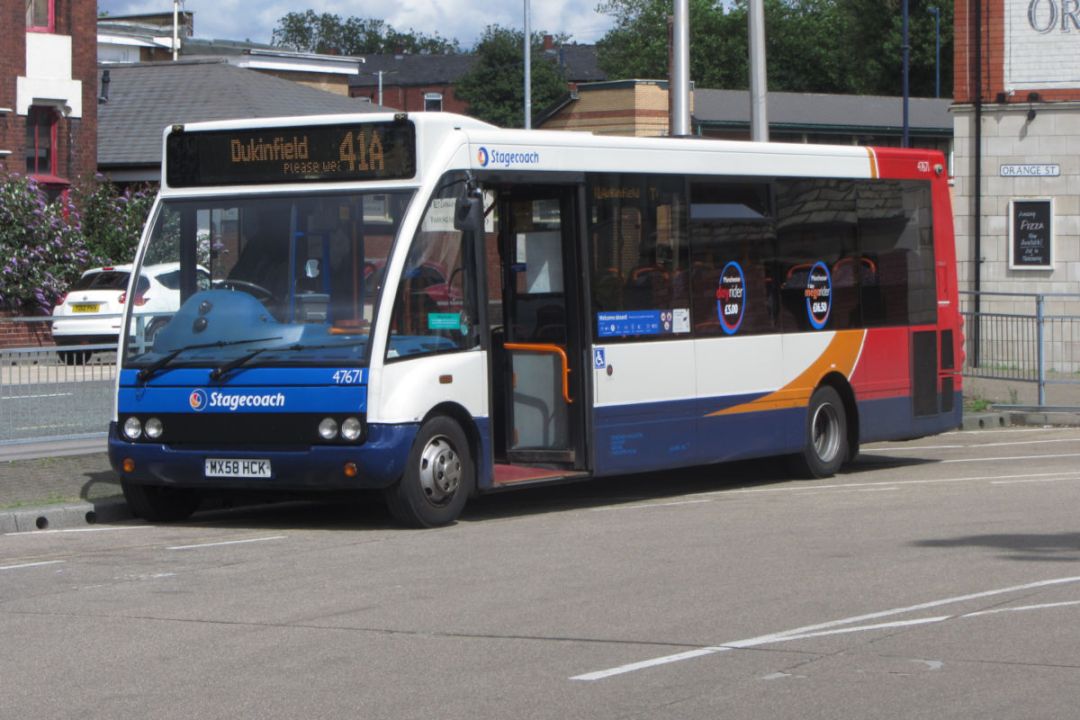 On Sunday, Stagecoach Greater Manchester’s latest timetable updates will see the retiming of many of its trunk routes to School Holiday schedules, and changes to two trunk routes in the Tameside and Glossop area. To a point, these routes will see their daytime frequencies reverting to pre-bus deregulation levels.

The most significant of the changes affect the 346 route. Since FirstGroup’s Hard Tamexit, Stagecoach Greater Manchester became the sole operator of that route. Before First Greater Manchester pulled out, Stagecoach’s journeys were every 20 minutes with First running a similar frequency in the daytime. For owners of System One passes, this gave the 346 a neat turn-up-and-go frequency on Monday to Saturday daytimes.

Following FirstGroup’s retreat from Dukinfield, Stagecoach increased the frequency of their journeys to every 15 minutes in the daytime. Within a year, COVID-19 reared its ugly head and as with all bus routes across our City Region, patronage dipped. From Sunday, the 346’s Monday to Saturday changes will see Stagecoach reverting to its 20-minute frequency. The only difference is the lack of another operator wishing to share the route and fill in the thrice hourly gaps. Yet these gaps are significant enough to justify walking into Ashton-under-Lyne from Old Chapel instead of waiting for the next bus.

Ironically, on the 29th anniversary of Tameside Depot’s closure, the 346’s daytime frequency will be back to Greater Manchester Transport levels on weekdays and Saturdays. There are no changes to Stagecoach’s evening, Bank Holiday and Sunday journeys (which won’t be increased to GMT’s half-hourly frequencies in the foreseeable future).

Between Mottram-in-Longdendale and Ashton-under-Lyne, the 237’s frequencies will also see a whiff of deja vu. Yes, the 237 will also be half hourly – six days a week this time. Since September, the 237 has had its thrice hourly daytime frequency on weekdays. This was to compensate for the withdrawal of the 236 route (which was taken on by North Western/GB Coaches and only lasted three days). On Saturdays, cut to every half hour. From Monday, the 237 will be half hourly, falling into line with the Saturday timetable with an earlier weekday start.

Before the 236 and 237 lost its Ashton-under-Lyne – Manchester city centre links, both routes combined to create a half-hourly frequency between The Gun Inn and Piccadilly Gardens. If you want to go further back when it was the 6 route, up to Lower Mosley Street Omnibus Station, and limited stop at that. Though Hadfield will have a still respectable two buses per hour, it is still superior to how things were before 2011 when the village’s link with Stalybridge and Ashton was once hourly.

If there is one consolation for anyone travelling between Roe Cross and Stalybridge, consider Stott’s Tours’ 387 route as another option, if you have a System One or GetMeThere ticket. Whilst on the subject of new routes, this next one missed the cut in our previous bulletin…

In the previous set of service changes, we saw the withdrawal of the 419 route. Instead of severing Ashton-under-Lyne’s link with Middleton, changes were made to the Limehurst Farm 396 route. On Monday to Saturday daytimes, the 396 now serves Middleton instead of Newton Heath. North of Limehurst Farm it continues to Fitton Hill and Hathershaw and Hollins Road. Instead of going straight to Hollinwood, it now turns left onto Frederick Street, using the former Hollins Road to Middleton section of the 419 route.

For a week, this left the people of Hollinwood, Failsworth, and Newton Heath without a direct bus to Ashton-under-Lyne. From the 02 November, this gap was filled by Go-Goodwins – in what is their first incursion into stage carriage work in the Tameside area. Their new route is the 397. At present, it has a 90-minute frequency between 7am and 7pm on weekdays and Saturdays. Plus their 397s wear a modern-day version of the Little Gem livery (which includes Ken Mortimer’s iconic logotype). As for the route, direct to Hathershaw (outside Park Cake Bakeries) before following the old 396 route to Newton Heath. If anything, it has more in common with Citibus’ long gone 428 route.

In the last year alone, we have seen some interesting new entrants to the Tameside bus scene. Many of which have filled gaps left by First, Stagecoach and MCT Travel. After Stagecoach, Stott’s Tours is probably Number Two in terms of the number of routes, though third in market share behind First Greater Manchester.

As a consequence, Stagecoach Greater Manchester will be introducing their School Holiday Timetables on Monday. Three weeks earlier than usual for the run-up to Christmas and Yuletide services. In Tameside, this affects the following routes:

This Friday could well be a moment of truth for Greater Manchester’s bus passengers. It is that very day when the Greater Manchester Combined Authority will deliver its verdict on the shape of our City Region’s buses. In the GMCA’s 142-page report entitled Covid-19 Impact on Bus Franchising, a franchised system is recommended ahead of partnerships and the ‘do nothing’ (which is the current deregulated environment). Interestingly, Stagecoach Greater Manchester’s changes will take place two days after the GMCA’s announcement.

As for what lies ahead in next year’s changes, we could see the 335 becoming a full time service – partly adding what are presently the 41A’s evening, Sunday and Bank Holiday journeys. For the first time ever, the 342 and 344 could be getting Sunday and Bank Holiday journeys. Though on a modest two-hourly frequency, it is a small but significant step. If these plans go to fruition, expect to see the addition of evening journeys on the two routes at the expense of the 346’s Hyde to Gee Cross extension.

So, where next? A lot of it will lie on the GMCA’s verdict this Friday. At TfGM bus stations, there has been a lot of inspectors surveying bus movements (which, if you have read in Doing Buses Differently and similar documents, is a precursor to creating a franchised network or partnership scheme). From my observations on essential journeys for outdoor exercise, shopping and work, they have been sighted at each stand at Oldham, Ashton-under-Lyne and Stalybridge bus stations.

Needless to say, we could be in for an interesting climax to 2020. By the time when 2021’s first lot of service changes have been compiled, the convenience store would have opened in Ashton-under-Lyne Interchange. With these slightly longer waits for 237s and 346s, a coffee wouldn’t go amiss.