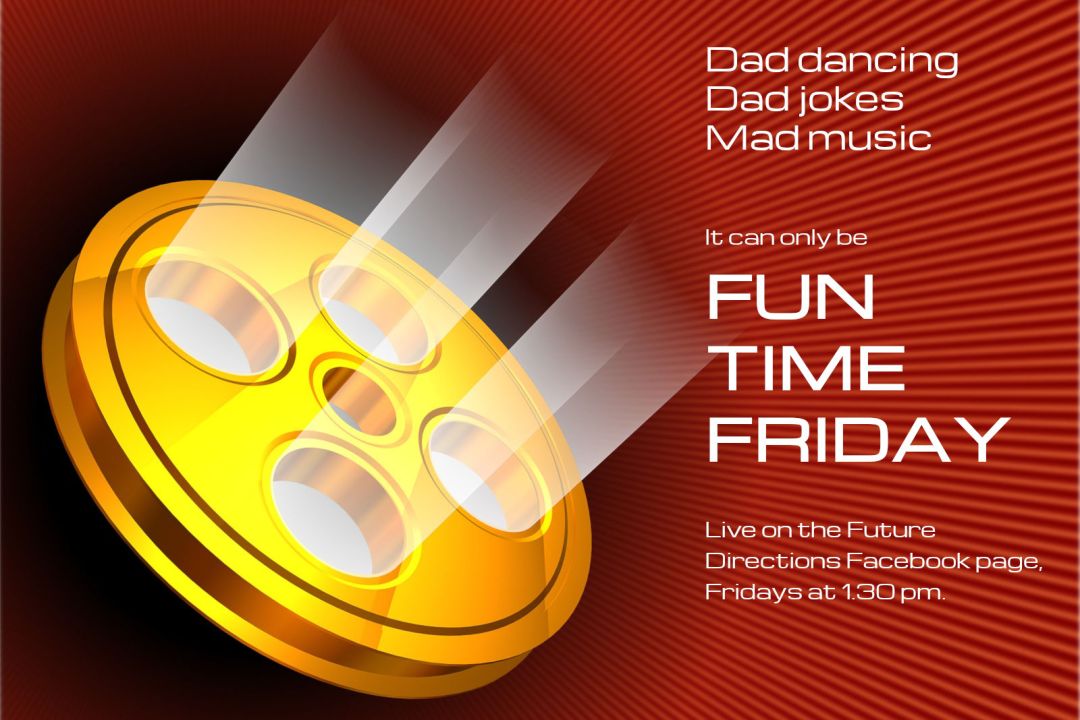 What do you get if you cross an extremely talented musician with a pretty good blogger and dancer (!) on a Friday afternoon?

Make no mistake: this sub-headline isn’t a dad joke, though a fast-paced mixture of dad jokes, dad dancing and mad music is behind one of Future Directions CIC’s most notable projects. Known as Fun Time Friday, it is a 45-minute programme of music, dad dancing and jokes which goes out on Friday afternoons.

There are two people that are instrumental to the success of Fun Time Friday, both of which are employed by Future Directions CIC in Chadderton, near Oldham. One of the them is Activities Coordinator Kevin Phoenix. Known as The Music Man, he started out by carrying his guitar to each of Future Directions’ supported housing schemes. There he would entertain the people that Future Directions CIC support across the North West of England and parts of West Yorkshire.

With COVID-19 having had a great effect on Future Directions’ service area, this meant fewer visits to any of the houses. Instead of going to several sites, he would focus on one site and FDCIC’s HQ at Marle House. The one site in question is Stanley Grange, a supported community near Preston which has been run by Future Directions since 2015.

With the arrival of England’s first lockdown, the Music Man couldn’t take to the road the same. Therefore, social media became a useful ally, the tools of choice of FD’s Social Media gurus Melissa Tolan and Stuart Vallantine (yes, that Stuart Vallantine, the creator of East of the M60). With Future Directions’ Facebook page having an active following, they turned to Mr Zuckerberg’s social media platform for the next project.

“Stronger together, we have the power…”

Instead of taking his show out to parts of Trafford, Stockport, Rochdale and Halifax, Kevin made an executive decision: a Friday afternoon show with no more than six people (predating the Government’s Rule Of Six by a few months). The session would go out live on Future Directions’ Facebook page and available to view by members of staff and people supported by Future Directions aged from 16 to 98 and upwards. There would also be guest appearances.

The original cast included himself, long time friend Bruce Gordon (known in his Fun Time Friday guise as Brucie Bonus) and two or three more fellow colleagues. One responding to Facebook comments with another one providing in-vision continuity.

As well as music and jokes, the aim of Fun Time Friday is interaction as well as entertainment. The people that Future Directions support feel included if their request is heard on the live feed. Like the golden days of Independent Local Radio, viewers can request songs, shout outs and birthday requests. Only by typing their request on the Facebook feed instead of ringing a converted church in Preston or a canal warehouse in Central Manchester.

The musical mainstays of a Fun Time Friday session are Always Look On The Bright Side of Life from Monty Python’s The Life of Brian, and Matt Lucas’ Thank You, Baked Potato song. Both of which are played by Kevin Phoenix himself on acoustic guitar, but his guitar skills scratch the surface of his abilities.

The Music Man himself

Kevin Paul Phoenix was born and brought up in Wythenshawe, a place which many scholars of Manchester music would associate with Slaughter And The Dogs. He has written songs for both Manchester City (The Colour Blue) and Manchester United (The Red Devils) football clubs, and wrote the soundtrack for MUTV’s documentary series on Eric Cantona. He has also featured on Channel Four’s evening football programme, Under The Moon.

Music has been his life since the age of eight. Kevin joined his first band, Amarillo on lead guitar. Then, as part of Free Spirit, he wrote Sweet Girl, Catherine Wheel and Losing Touch. As part of The Charming Peters on lead vocals, he wrote Shine On, Looking At You, and Take Your Father’s Hand. The Charming Peters were the first band to play Yates’ pubs across the UK.

Before being at Future Directions, he worked at the National Autistic Society’s Northenden office. It was there he offered music workshops for people with autism spectrum conditions. After a few well-received performances as The Music Man in his original Wandering Minstrel guise, Future Directions liked him. The rest, as they say…

With COVID-19 leading to a national lockdown, the Future Directions value of being adaptable came to the fore. One of the Community Interest Company’s main challenges was how to relay the Government’s message to the people they support. The prose needed to be accessible, and its delivery needed to be fun instead of dry or frightening. This meant song as well as social media posts.

Inspired by this, Kevin wrote Stronger Together, a gentle and uplifting song which sends out the social distancing message in an accessible way. This spawned a video with socially distanced dance moves, filmed in the grounds of Stanley Grange. Both the song and the video attracted the attention of local radio stations. One station, Radio Alty, devoted most of a two-hour programme to the song and Future Directions’ raison d’etre. In its live form, the song is performed at numerous Fun Time Friday sessions.

The making of a Fun Time Friday

The premise of Fun Time Friday is simple: it is an afternoon celebration of the good things that Future Directions’ people (staff and the people they support) have done set to music. Hence the shout outs and requests between songs. Each session lasts 30 to 60 minutes, though more recent Fun Time Friday sessions have been kept to a pithy 45 minutes.

Everything is planned to the nth degree: the dad dancing; the music selection, whether live or recorded; the shout outs; and the guests. Each guest is either a member of staff or (with prior consent) a person supported by Future Directions CIC. The dance moves and the positioning of Kevin Phoenix’s Fun Time Friday team allows for social distancing and – by coincidence instead of design – upholding The Rule of Six.

Hours before the session begins, the first thing that is planned is the playlist. There is some wiggle room for special requests, whether in live or recorded forms. Initial research might begin on the journey to Stanley Grange or Marle House. Guitar chords are printed in advance of the Friday afternoon soirée. An hour before the session goes online, the all-important job of setting the stage is completed. Tape is marked on the floor for the ‘dance floor’ and the chair. The running order is noted on a flip-chart, proof that the most low tech solutions can be effective in 2020.

With half an hour to go, there is a pre-session sound check and a run through. As the clock reaches 1.30 pm, the record button is pressed on Future Directions’ Live feed on their Facebook page. Another fast-paced session of mad music, dad jokes and dad dancing has begun.

Many of Fun Time Friday’s viewers are fellow Future Directions colleagues, the people they support, and family and friends. It has also received a cult following beyond the North West of England. Viewers are encouraged to share clips and/or photographs of themselves enjoying Fun Time Friday by clicking the Whatsapp button at the top of the Future Directions Facebook page.

As well as The Music Man himself, more dad dancing and dad jokes are done by Stuart Vallantine (as seen in the link to this clip). Also known as Stugle, his entry into Fun Time Friday came via promoting the sessions on social media. The next thing he did was create the Fun Time Fun Quiz, a multiple choice quiz of three easy questions that did exactly what it said on the tin. Though the rest of the session was filmed at Stanley Grange, the quiz came from Marle House.

Thanks to the limitations of contemporary broadband technology, the Fun Time Fun Quiz was retired in October. Bandwidth issues meant the quiz was inaudible with Stugle’s link disappearing into Commodore 64/old school Teletext style pixels. What marked this turning point was Stugle’s dancing on stage, which yielded a better response on Facebook than the quiz. Since then, Fun Time Friday has never looked back.

A cause for virtual celebration

With the pandemic thwarting Future Directions’ annual Celebration Day, a decision was taken to replace the annual event with seven virtual celebration days over a two-week period. This meant a bigger role for the Music Man and Stugle. In Stuart’s own words:

“The Virtual Celebration Day was a fantastic fortnight to say the least. Firstly there was the creativity from each of the people that Future Directions support along with their values driven staff. Secondly, it was clear that nothing could stand in the way of celebrating their achievements – even a pandemic that has lasted for most of the year.

“On a personal level, I enjoyed working on the Virtual Celebration Day stuff – the videos, some of the live sessions, and the minor inconvenience of getting Halloween make up off my face.”

Thanks to the Virtual Celebration Days, Fun Time Friday came of age. The running order has settled to include Kevin’s performance of Always Look On The Bright Side of Life at the beginning with Thank You, Baked Potato near the end. The singing of Matt Lucas’ song – recently changed to reflect the pandemic – includes an animated Baked Potato puppet (which, believe it or not, is the right hand of yours truly). There is now a greater role for dad dancing and daft outfits. The guest appears one-third way through the session.

As Christmas gets closer, Fun Time Friday’s Mission To Entertain has extended to adding Christmas decorations to the set, and the playing of the odd Christmas song. On the horizon is a Fun Time Nativity Play and – once this pandemic is over – there could be a Fun Time Roadshow.

For more music of original and not-so-original varieties, you can also subscribe to Kevin Phoenix’s YouTube channel. You know you should, you really should…