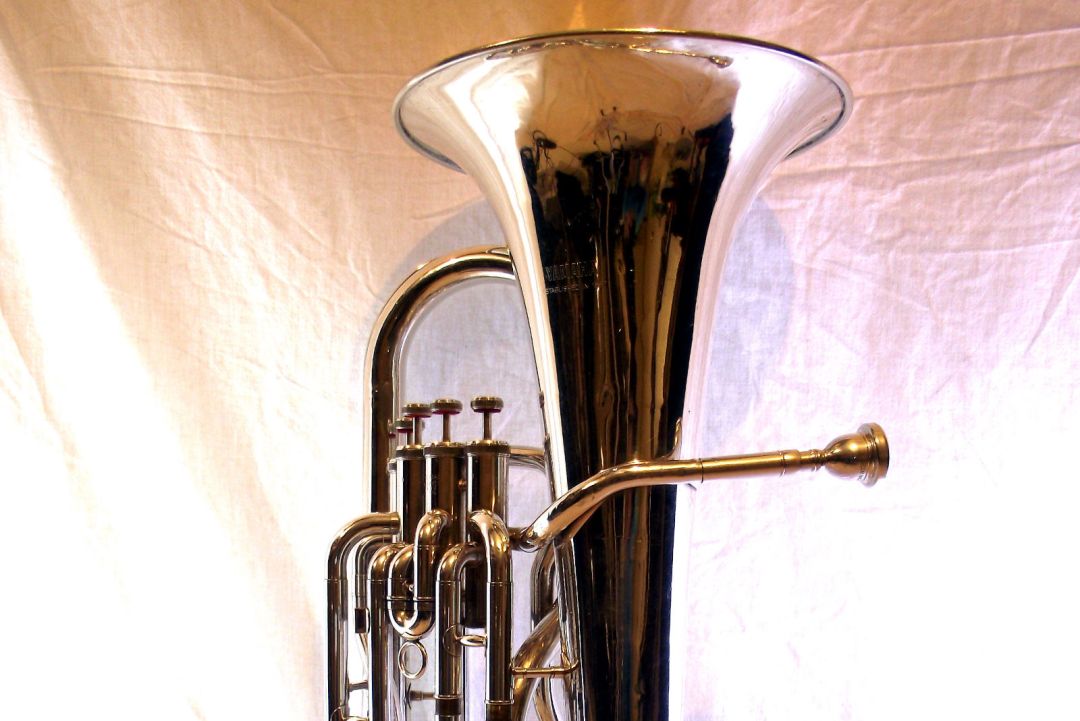 After being forced to choose from singers dressed as yellow ducks or unicorns, or ice-based pratfalls, the people of Saddleworth (and Boarshurst Silver Band’s avid streaming audience) were saved from such misfortune last night. At 7pm, Westoe Brass Band began the 2020 season of concerts in style.

Since the closure of Westoe Colliery in 1993, the band change its name from Westoe Colliery Band to Westoe Brass Band. The Westoe name was added to the band in the 1950s with Harton dropped in 1986.

Last night’s concert, unlike last year’s, had one Musical Director. This time, Aidan Hodgson – previously of Dunston Silver Band. He was appointed shortly after last year’s concert. Aidan was taught at the University of Huddersfield, with Philip McCann (yes, the Cornet Legend that is Phillip McCann) as his tutor. Away from Westoe Brass Band, he is also a music teacher.

In all, this was another memorable concert. One that tight in terms of performance and delivery. With staccato delivery and unwavering clarity, Musical Director Aidan Hodgson was informative yet kept the chat between pieces to a minimum.

Even with the earlier start and freezing temperatures, the live audience turnout was encouraging. With the warmest of receptions at Boarshurst Band Club, a great night.

Instead of opening with the National Anthem (which only a handful of bands do these days), we opened with a regal piece all the same. That of Pastime with Good Company, written by King Henry the VIII. It is also known as The King’s Ballad – reputably written for Catherine of Aragon. It was also covered by progressive rock bands Gryphon and Jethro Tull. A brilliant start to the concert.

Next on the agenda was our one and only soloist of the night, Jo Wright (Flugelhorn). For many listeners, with a fairly new piece in A Little Star Went Out. Written by Philip Harper, the piece is dedicated to soloist Helen Williams, who performs this number on The Cory Band’s Storytelling album (Chandos Music, 2017). It is inspired by Roald Dahl’s biggest personal tragedy: the loss of his seven-year-old daughter to measles. Jo Wright’s performance on flugelhorn was a most inspirational performance: not a duff note, great volume.

Sticking with our Mastermind subject of The Original Works and Arrangements of Philip Harper, this was followed by Queen’s Fat Bottomed Girls. His arrangement of this tune from the 1978 Jazz LP never fails to lift audiences with Westoe Brass Band’s performance being no exception to the rule. As for the song, it was released on a double A-sided single with Bicycle Race. It peaked at Number 11 in the UK singles chart.

For our next piece came the first flowering of a space sub-theme. This time with Ben Hollings’ excellent Lake of Tenderness. The piece was commissioned by Dr. Robert Childs for Grimethorpe Colliery Band in 2015 for their Brass In Concert programme. It depicts the basaltic plains of the Earth’s moon. Of late, it has been a favourite piece with Boarshurst Silver Band. Westoe Brass Band’s performance was further proof as to why Hollings’ work has won many friends. It gives bands a good workout in the slow melody department whilst captivating audiences.

Next up was our first of two jazz standards of the night: Abdullah Ibrahim’s Maraba Blue. The South African composer was inspired by American jazz music and this piece features on his 1997 album Cape Town Flowers. This piece was a neat showcase for Westoe Brass’ percussion section. A fantastic, laid-back piece for any concert programme.

From Cape Town, we moved to South Shields for our penultimate piece of this half. A legendary one in the form of The Water Of Tyne. In the folk song, a woman sees her paramour being separated by the aforementioned river. Instead of Haughton Castle, today’s version would have been set in the Shields with the paramour stuck in North Shields. He could have got the Shields Ferry to South Shields, but left his Pop Card at home. An all time classic brought to life by a great band.

In another decade, our final piece of this half may have been written as Fantasia on Opal Fruits. Written by Dan Price, Starburst continued the space sub-theme. It was commissioned by the Greater Manchester Youth Brass Band. In June 2014 it was premiered at The Bridgewater Hall. The lively piece symbolises an abnormally high rate of star formation. Billed as a concert opener on Dan Price’s website, Westoe Brass Band’s decision to use it as a pre-interval piece worked well.

“Why have cotton when you could have silk?”

Rounding off the space sub-theme (and another plug for Mars Confectionery’s products) was Paul Lovatt-Cooper’s Enter The Galaxies. This was premiered at Brass In Concert 2008 by The Cory Band, who won that year’s competition. It is a tribute to the pioneers of space exploration and a real feast for the ears. As a concert opener (or a second half opener as was the case), nothing short of sensational.

Next up was William Himes’ Procession To The Covenant, which is the Yin to the Yang of PLC’s masterpiece. It is a gentle number that was originally written for his own wedding. The piece also features the hymn tune St. Margaret. Once more, another test for the slow melody department and one where they made the cut. Good work.

As with last year’s concert, Westoe Brass Band showcased some of the finest local talent with two pieces written by local composers. First of the two was Lee Morris, who gave us Felton Lonnen last year. From his arranger’s pen we were treated to Skye Boat Fantasie, a fresh interpretation of The Skye Boat Song. It has originally been arranged for piano, violin and viola. As we found last night, it worked very well as a brass band composition.

For our next piece, we returned to familiar territory with a lively jazz standard. This time with Sing Sing Sing (With A Swing!) by Louis Prima, arranged by Ray Woodfield. Whether played by The Cory Band or a budding youth band, this popular number never fails to captivate audiences. Last night’s performance was a bouncy and radiant one from our friends on “the proper side of the River Tyne”.

After Lee Morris’ arrangement of Skye Boat Fantasie, we moved on to another locally arranged piece. This time, Steve Gibson’s arrangement of The Hewer’s Prayer. Consistent with the band’s mining heritage, the hymn is an imagined prayer for mineworkers who often worked in the deepest and most dangerous areas of the pit. A fantastic, well bodied performance of an original piece.

We upped the tempo with our penultimate piece of the night. J.J Richards’ The Waltonian, arranged by Thomas Wyss. Written in 1928, it is regarded as a circus march. Though noted as an American composer, J.J Richards has Welsh ancestry. The arranger, Thomas Wyss, is a well known figure in brass banding as an adjudicator as well as a Musical Director. A great performance of a traditional favourite.

The real crowning glory of last night’s concert was Peter Graham’s Shine As The Light. If you thought most of the concert was breathtaking, their performance of Peter Graham’s test piece took the concert to new heights. Written in 1997, it features two Salvation Army hymns: The Candle of the Lord by Joy Webb, and Chuck Yuill’s The Light Has Come. With its thunderous crescendo, it is a piece that leaves you wanting more. Which, going off the audience reaction, was unanimous.

To finish the concert we had Balkan Dances by Etienne Crausez. Inspired by Eastern European music, it is an audience-pleasing piece which brings out the best in each soloist. In some cases, the MD can announce each soloist The Intro and Outro fashion. Aidan refrained from such frippery, leaving the soloists to do their best.

By 8.45 pm, Westoe Brass Band’s concert was over with yet another tight performance. As well as one or two old favourites, Westoe Brass Band gave us a most inventive and entertaining programme with some new pieces. We look forward to their return to Boarshurst in 2021.

Next week at Boarshurst Band Club…

This will begin at the usual time of 8pm with doors open at 7pm. As always, please arrive as early as possible to be sure of a good seat.