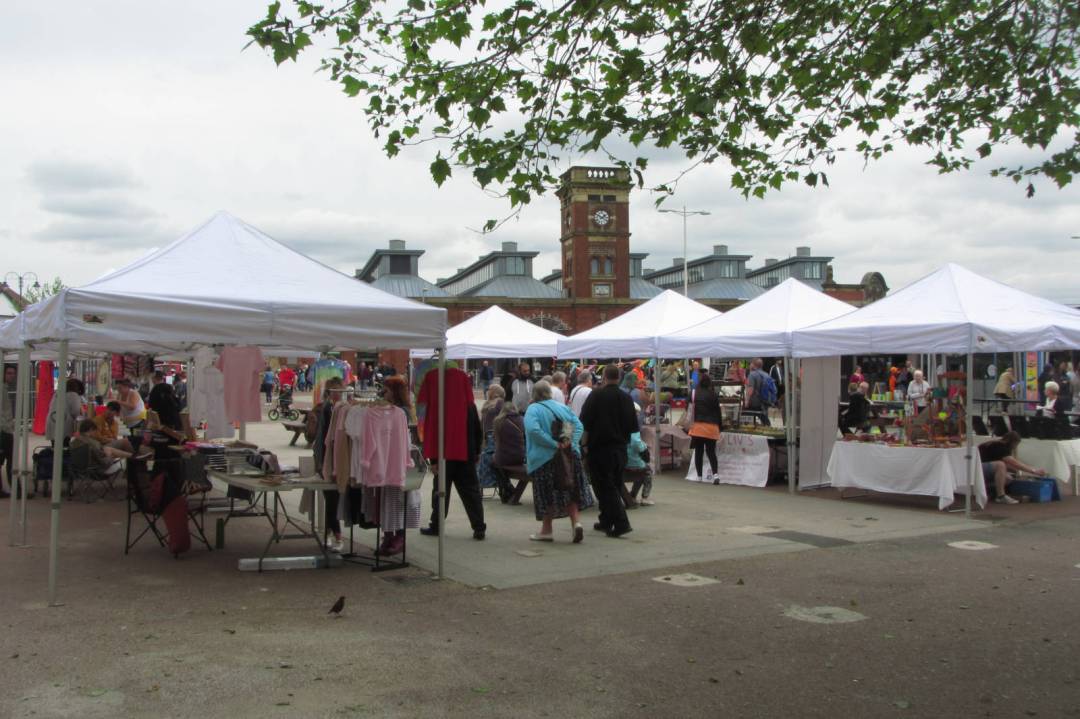 Retail Comings and Goings in Tameside, June 2019: The Ashton Review of Shops

Had it not been for the successful Tameside Young Traders’ Market and the proposed closure of a retail stalwart, a fairly ordinary month.

Tameside’s first Young Traders’ Market was a real success on the 25 May. The open area of the Ashton Open Market ground was monopolised by temporary stalls held by youthful entrepreneurs aged 16 – 30 years old.

Though the weather was a little overcast, the climbing walls, musical performances and youth engagement sessions were well received. Their stalls offered a useful complement to the permanent stallholders.

Topshop and Topman to close

After 35 years on Warrington Street, Topshop and Topman will be closing its doors in Ashton-under-Lyne. With the ‘to let’ sign hung over the unit for over three months, you could safely say it had been on the cards for a bit.

Ashton-under-Lyne’s branch was the last Arcadia Group store in the capital of Tameside. In January 2015, Burton and Dorothy Perkins closed on Staveleigh Way, transferring its business to their Crown Point North store. Topman and Topshop is one of 23 planned closures of Arcadia Group stores which include stores in Fareham, Glasgow, Newcastle-upon-Tyne, and Luton.

Therefore, Tameside’s one and only outpost of Philip Green’s shrunken retail empire will be Outfit on 13 – 14 Crown Point North, Denton.

National retailers have been making the news for all the wrong reasons. TESCO’s latest cost-cutting drive will the end of fresh food counters in one store, and part-time status for some.

TESCO’s Stalybridge store has seen the closure of its fresh delicatessen counter whereas its fish, meat, and hot food counters have gone part time. Its smaller Greenfield store will retain all its counter – albeit on a part-time basis. For Hattersley customers, all counters at their TESCO Extra have closed.

Whereas Stalybridge shoppers have access to two great alternatives (Say Cheese and Boult’s Butchers), the people of Hattersley have lost out the most. A trip to the nearest butchers from Honiton Avenue requires a 201 to Hyde or a 387 to Stalybridge. Unless they are happy to have their cooked meats in pre-packed form.

The return of an iconic pub

Today (01 June), an iconic pub will be back on the streets of Stalybridge. The Old Thirteenth Cheshire Astley Volunteer Rifleman Corps Inn will reopen on Market Street. The newly-revived pub, some distance from the original one on Astley Street, will be two doors from The Q-Bar.

TAC Tales: Update on Tameside One

Two new signs have been added to direct customers to each of Tameside One’s co-located services. One is close to the entrance of the Tameside Central Library whereas the second sign is facing Wellington Road.

By the end of this month, Wilko will move from their present unit at the Arcades Shopping Centre to Tameside One. The new store in its ground floor unit will open on the 10 July 2019.

Polite Note: for reasons of brevity, any pub and club applications come under the Pub and Club Update section. Aye thank you…

Once again, as Bjork said…

Apart from the high profile changes, a little quiet.

The biggest story by far is the return of The Old Thirteenth Cheshire Astley Volunteer Rifleman Corps Inn, albeit on new premises. As things stand, The Little Astley (Astley Arms, Tame Street) is still closed with depubification most likely.

As for The Top Astley, (Astley Arms, Crescent Road) isn’t only in the midst of refurbishment. It is between pub managers and in the midst of joining the Inglenook Inns and Taverns pub company. The Darwen-based pubco has tenanted and managed houses (i.e.: on behalf of Robinson’s Brewery).

Over in Dukinfield, The Forester remains tinned and depubification seems likely. The Lodge Hotel, over the last month, has seen a change of manager. In Ashton, two pubs could be changing hands: the iconic Molly Malones on George Street (Leasehold For Sale) and The Feathers on Old Square (Freehold For Sale).

Our next Ashton Review of Shops will be out on the 06 July 2019 at the usual time of 9am. Same bat time, same bat channel… need we say more.

One thought on “Retail Comings and Goings in Tameside, June 2019: The Ashton Review of Shops”