Could we have seen a GMT liveried Concorde flying over Concord Way?

The Greater Manchester Museum of Transport in Cheetham is a wonderful tourist attraction. Besides its collection of buses, bus stop flags, and other artefacts, it has an excellent café. The museum really comes alive on special event weekends – such as the Christmas Cracker or commemorative events. For many people, it is well known for the Trans-Lancs Transport Show which takes place on Heaton Park, on the first Sunday in September.

For the absolute hardcore bus enthusiast (like yours truly and some of East of the M60‘s readers), the real treasure is upstairs above the café. The museum’s archive library with its plethora of timetables, posters, and maps. Even technical drawings. One of them is a picture of Concorde in a version of the Greater Manchester Transport livery from 1980.

Concorde on Concord Way? Back in 1980, we would have been happy with a GMT standard double decker on the 346. Or one of these new fangled MCW Metrobuses on the 221. Sometimes one of the old order from SHMD – at least for another year with the Daimler Fleetlines.

Strictly speaking, Concorde only played a minor role in Greater Manchester Transport’s history. The supersonic aeroplane – a classic example of pre-European Union cooperation between the UK and France – was used for a staff training exercise. It was used for a Draughtsperson’s exercise for colouring in artist’s impressions of new vehicles.

The Greater Manchester Museum of Transport’s Flickr account has a July 1980 photograph of this exercise. It shows the M-blem on the tail and two different takes on the GMT livery. One has a fine orange line – which would have been a thin blue line in the original British Airways livery. Another version shows a brown line with an orange body. This being a cross between the 1980 GMT livery seen on MCW Metrobuses and Leyland Titans, and a 1970s Monarch livery. Or CP Air’s orange livery.

Had GMT’s Concorde left the drawing board, the Manchester Evening News’ Postbag page would have been in cahoots. The Transport Minister at the time, Sir Norman Fowler, wouldn’t have entertained the idea. Nor would any of Greater Manchester’s councillors. On the other hand, it would have brought spectators onto the piers at Manchester Airport.

In the air tonight? 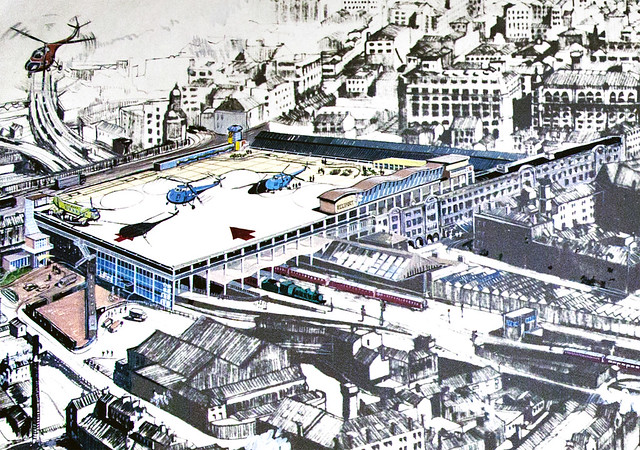 Back in 1956, City Surveyor R. Nicholas (on behalf of Manchester Corporation) created a design for a heliport. His desired site straddled most of Manchester Victoria station with a passenger terminal above the offices. Back then it was envisaged that helicopters would offer short haul trips between city centres.

Twenty years later, this wasn’t the case. The InterCity 125 High Speed Train, electrification of the West Coast Main Line, and our motorway network put paid to such predictions. In 1976, flying meant a trip to Majorca than an expensive inter-city domestic helicopter ride. Charterplan also added a direct coach service from Manchester to Paris.

Supposing helicopters did catch on in 1976 or 1980, they might have been in British Airways’ livery. Or they could have transferred to PTE or National Bus Company control if every principal English city had a heliport. We are still nowhere near that era, especially as trains can shift several more passengers efficiently and quickly.

If Greater Manchester Transport did flights in 1980

In 1980 as in 2018, the sight of new trains – let alone helicopters – were a rare beast at Manchester Victoria station. Though you couldn’t land your helicopter above the Oldham and Rochdale platforms, the 200 Airport Express took you to Manchester Airport from there. The coaches had their own route branding. There was few stops in city centre Manchester. Then it was non-stop to the airport except for an intermediate stop at Trusthouse Forte’s Post House hotel in Northenden (now Britannia Hotels’ Airport Hotel).

Meet Elinor Morris, aspirant singer-songwriter for Hyde’s answer to The Nolans. She is off to see a little known Manchester group in the states. They reformed as another group following the loss of their lead singer seven months ago. She was delighted to find an Apex Return fare to New York for £200. Her ticket also includes free travel on the 200, 400, or 500 bus routes – which terminate at Manchester Airport.

Before checking in at Manchester Airport, passengers could buy their tickets at a Saver Sales office. She bought hers at Hyde bus station, much to the ire of fellow colleagues from Senior Service who queued behind her. If she bought her ticket at Manchester Airport, it would have costed her a bit more. She could have rang 061 228 8181 and paid with a credit card (which she doesn’t have).

On the 346 she dunks her ClipperCard into the ticket canceller. In 20 minutes, with her luggage, she’s in Ashton bus station. With a 20 minute wait for her 400 bus, she calls in the Metro Kiosk for a copy of Smash Hits and some mint Tic Tacs. Then she board her 400, shows the driver her ticket to New York, and relaxes till she gets to Ringway.

Using the Metro call control centre, the driver says there’s three passengers going to New York. This puts the driver in contact with the Charterplane check-in desk at the terminal and speeds up her check-in time.

On arrival at Manchester Airport, Elinor is met by a friendly porter who takes her to the check-in desk. Her luggage is checked in, she walks towards the airport terminal with its famous chandeliers. Alongside the insignia of airlines past and present in bas relief work, the M-blem takes the place of a former BEA flag. Next door to Finnigans is a Metro Kiosk and a Metro Flora florist.

Two hours later, she is ready to board her flight. The aeroplane, a Douglas DC-10, is in full view. It has a version of the Britannia Airways livery, only with orange and brown strips instead of red and blue. The orange M-blem in a brown circle is seen on the tail with a Starsky and Hutch style sweep. Like the Charterplan coaches of the time. Only with Charterplane in an oblique Futura Black typeface.

On boarding the plane, she notices how familiar the cabin crew’s uniform is: the pilot has a similar uniform to her driver on the 346 route. The hostess’ uniform is similar to in colour, those less revealing than the one worn by the Selnec Travel/Charterplan Girls. After taking her position, she finds that the seats have exactly the same moquette as the Leyland Atlanteans’ downstairs ones.

Before take-off, she picks up a copy of the in-flight magazine Plane Speaking. There is an interview with Judith Chalmers – timely as a new series of Wish You Were Here? was around the corner. In-flight entertainment comes courtesy of Magic Music – basically reruns of Steve Penk’s programme from Piccadilly Radio. There is also a programme featuring Brian and Michael. Like any bus with the Sounds In Motion system, you couldn’t even get away from Dean Friedman’s Lucky Stars.

For Elinor, flight CH346 left Manchester Airport on time. On board, she can buy anything from a three course meal to a packet of peanuts. When she’s thirsty she can choose from Vimto, Tizer, PG Tips tea, Nescafé, Chesters Mild, Boddington’s Bitter, and Einhorn Lager. In seven hours time, she would arrive in the Big Apple, refreshed and relaxed.

Elinor flew from Manchester to New York for £200 on Charterplane’s Transatlantic service. An Apex Return can be booked from Saver Sales offices, selected travel agencies, or by dialling Greater Manchester Transport on 061 228 8181.

If only…! If you’re wondering why there’s no reference to a Paris flight in the fictitious review, it would have undermined the coach service from Manchester to Paris. Which, unlike our fictitious Charterplane operation, did happen.

One operator was a long-established Manchester coach operator, Finglands. In the late 1940s to early 1950s, Finglands Airways had scheduled flights and chartered flights from Ringway. An Avro 652A Anson was the usual aeroplane of choice. Their two Avro Ansons were seen on flights to Newquay and trips to Blackpool, for the illuminations. One pilot, Robert Fingland, was a former RAF pilot.

With the cost of operating an airline, Finglands Airways ceased operations in 1952. It was a factor which led to their principal business’ sale to its General Manager, Robert Bunning. Finglands expanded, by buying up smaller businesses and continued as Finglands Coachways. In 1992, it was sold to East Yorkshire Motor Services. By 2013, its bus operations were sold to First Greater Manchester.

In 1982, Air Manchester was formed by Sureway Travel. They had a chain of travel agencies in Greater Manchester and Lancashire. Operations began on the 03 June that year and ran till September the same year. Their only aeroplane was a BAC 1-11 Series 416. In later years, Sureway Travel turned to bus operation. For a short time, they competed with Arriva North West’s 375 route from Wigan to Southport. Their buses ran from Wigan to Ormskirk.

If Charterplane did exist, would you have been tempted with their offers and fine service? Would the idea of booking a flight to New York from Rochdale bus station’s Saver Sales office – and free travel on the 400 grab you? Feel free to comment on this whimsical subject. At least it would have seemed more realistic and workable than British Rail’s flying saucer.