Morecambe: The Decline, Fall and Rejuvenation of a Seaside Resort (Part Two)

Throughout Morecambe’s most prosperous, and its leanest of years, there is one structure that has been key to the town’s future.

The Stone Jetty has been a feature of the town centre since 1853. Before Heysham port opened, passengers bound for the Isle of Man took a ferry to Barrow-in-Furness. From there, they would transfer onto another boat for Douglas. They stayed at The Midland Hotel. It was also a terminus for Scottish and Irish ferries

The Midland Hotel was a world away from the one seen today. Its successor, and the Stone Jetty held the key to Morecambe’s destiny. Firstly, the Midland Hotel’s architectural significance (Oliver Hill’s design, plus artwork by Eric Gill and Eric Ravilious), which drew Urban Splash to the building in the noughties. Secondly, the Stone Jetty was a popular option for anglers and bird watchers. Placating both anglers and twitchers was the Tern Project. This imaginative revamp of Marine Drive (from Battery to Happy Mount Park) was officially opened in March 1999 by Queen Elizabeth the Second.

Some of the groundwork was laid before Blobbygate. A successful grant application in 1990 gave Morecambe extra funding for sea defences. Plans to restore the Winter Gardens theatre were first announced in 1986, when a Friends of the Winter Gardens steering group was launched. This would help to take Morecambe into the 21st century, leading us to an optimistic turn of the millennium.

A tern for the better

In 1998 and 1999, hopes were high for the resort’s rebirth and soul searching. Firstly, the land freed by British Rail from Morecambe Promenade station saw changes to the town’s retail offerings. This included the building of Central Drive, a new spinal road from Morecambe’s telephone exchange to Marine Drive. First to make their presence known was Morrisons, with a brand new store next to Frontierland.

A short distance from the site of the Empire cinema is a four-screen Reel Cinema, which opened in 1996 as the Apollo Four Cinema. Where the experimental electric trains and Class 101 diesels once ran is Festival Market, a market hall open on Tuesdays, Thursdays, weekends, and summer Bank Holidays. Beside it is a branch of KFC, one of three American style eateries that throng Central Drive (Frankie and Bennys, and Domino’s Pizza being the other two). Towards the Midland Hotel, a new four stand bus station was opened beside the railway station.

The centrepiece of the regeneration work was the Morecambe Promenade station buildings. They were tastefully refurbished as The Platform, an arts centre with bar and restaurant facilities. On the site of the Empire and the Floral Hall came Morecambe Superbowl. This would form part of the Central Retail Park alongside Morrisons.

As well as their Central Retail Park superstore, the Bradford-based supermarket chain would be part of an outlet village. Something along the lines of Fleetwood Freeport or Cheshire Oaks. Part of their plan would involve buying Frontierland next door.

After record-breaking Easter takings in 1992, Frontierland fell into decline. A year before, its manager, Jim ‘JR’ Rowland left for Blackpool Pleasure Beach. Throughout Geoffrey Thompson’s empire, this was a promotion. In 1995, to pep up visitor numbers, a new ride appeared: the Space Tower. Placed at the front of the park, it offered unique views of the resort. After a brief fillup, the novelty of the Polo-sponsored ride wore off. Visitor numbers continued to decline, except for healthy turnouts on Bank Holiday weekends.

In 1999, its owners floated the Cheshire Oaks style outlet village idea. The park was scaled that year, despite being one of the UK’s top ten most visited amusement parks. Lancaster City Council gave Morrisons the go-ahead to build their outlet village in 2001. By 2004, as detailed in The Visitor’s article entitled How The West Was Lost, there wasn’t a single shop. The Polo Tower and the log flume remained intact, with the latter awaiting a buyer. After its closure, the Polo Tower assumed a second life as a mobile telephone mast.

Today, Frontierland is still wasteland. The Ranch – originally The Casino – outlasted the theme park and remained open till 2016. It has been destroyed by fire.

Into the 21st century

The start of a new millennium brought hope for Morecambe. Its promenade was attracting new visitors who had been won over its public art. The idea of combining public art with tidal defences was so good that Cleveleys and Blackpool later followed suit. The Dome – née Superdome on opening in 1980 – had established itself as a live music venue. One festival, Holidays in the Sun, brought ageing punk rockers into the Lancashire town. For a few days, the likes of GBH, Subway Sect, and a few punk tribute acts turned the clock back to 1977 for a weekend.

In the mid 1990s, it attracted the cream of Indie music, adding a few more bums on seats to the town’s bus routes from the University of Lancaster. Close to getting a UK Number One chart single with Country House, Blur performed in 1995. The Arctic Monkeys performed in 2007.

Its next door neighbour, Bubbles, only saw two years of the new millennium. Rising running costs and spending cuts by Lancaster City Council led to the leisure pool’s closure. Bubbles added wave machines and water slides to the outdoor pool, on the site of the Super Swimming Stadium. It opened in 1991 and brought joy to young swimmers with its open air and indoor pools. It was demolished in 2001.

Ten years later, The Dome would follow suit. For the best part of twenty years, the likes of Connell Brothers had a longer season in Morecambe than the Chuckle Brothers. As with Bubbles, spending cuts saw to its demise, and its demolition in early 2011. Gardens mark the site of Bubbles and The Dome. Therefore, The Platform became Morecambe’s premier indoor music venue.

With Morecambe having had its fair share of ups and downs, its community should be credited for saving their resort from terminal decline. At the start of the millennium, the West End district was one of the most deprived parts of Morecambe. Most of the centre of Morecambe’s wards – Harbour and Poulton – have well above average figures for unemployment rates, smoking, premature death, and self harm rates. Detailed in a 2015 report entitled Lancaster District – The Bigger Picture – economic activity has depressed the resort, and its people. You can get a basement flat on the West End for as little as £31,000. It is possible to get a good sized three bedroom property for less than £200,000.

The West End has the potential to be Morecambe’s creative quarter. Its affordably priced houses could be within reach of bohemian residents if one has an open mind. Its sunsets alone should be enough to turn this part of Morecambe into another St. Ives. Some of the transition is already under way.

On 13 – 17 Devonshire Road, More Music, a community interest company, is offering performance space for up and coming musicians. There are regular gigs from a variety of groups. Anyone from poets to choral groups. The Hothouse, owned by the group since 2005, was originally the Devonshire Hall. During the 1980s and 1990s, its ground floor was a decorators’ shop with a snooker hall on the first floor.

More recently, the Alhambra on Regent Street could be restored to its former glory. After a fire in 1970, it has been an antiques market, a night club, and a wrestling venue. Plans are afoot to get it back to its best. In its present guise, it has attracted wrestlers, and Jeremy Corbyn. Morecambe could have two first class theatres if the Winter Gardens is restored to its full potential. The steering group has made bids for a long term funding package. Instead of the fifteen years they wanted, a three-year package was only offered. This is described in John Harris’ video for The Guardian.

What stands in the way of progress rings true in 2017 as it did 2011, and 1992: money. The imagination is there but the funding isn’t. Some Morecambers criticise the Lancaster centric nature of their city council. The Morecambe and Heysham Municipal Borough council’s absorption in 1974 is cited as a reason for the town’s loss of virility.

On a personal level, it sounds familiar to the tropes I hear in my borough. Particularly in Stalybridge where, to a lesser extent, its public buildings have seen demolition. Most notably its town hall, a community centre (which made way for a clinic) and its swimming baths. Though it lacks a beach, Stalybridge is noted for its scenery; this being Wild Bank, Walkerwood, and Hobson Moor.

In both towns, the people of Stalybridge, and the people of Morecambe have realised that the town alone cannot sell itself. It needs special events to entice the shoppers and day visitors. Themed weekends, from a dinosaur day to a Comic Con; also an annual carnival.

“In this world where we live, there should be more happiness…” 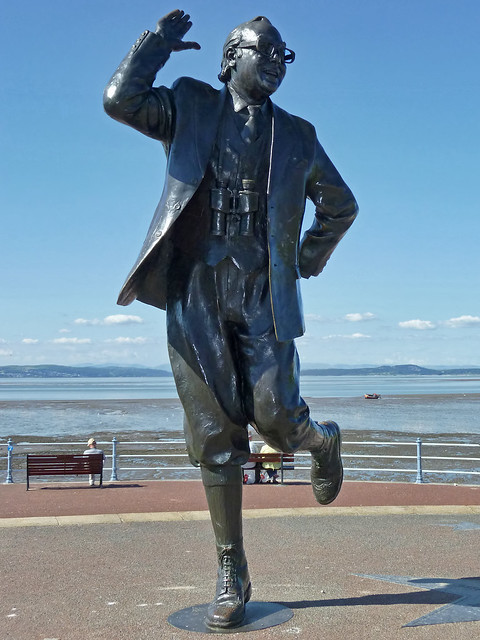 Without the people of Morecambe, there wouldn’t be a constant stream of events in the summer season. At the time this writing, we should be awaiting this year’s Bradford to Morecambe vehicle rally, and the town’s Vintage By The Sea weekend (02 – 03 September 2017).

As well as birdwatching and sunsets, there are several reasons to go to Morecambe. Not only kites, also festivals devoted to traditional seaside entertainment. Plus soul music, retro gaming events, and Comic Cons. Happy Mount Park has shook off its collateral damage from The Blobbygate Saga. Its own website is a joy to behold, with pirates being a major theme. Today’s visitors can play adventure golf; younger visitors could run across the splash park; and, after all that, meet up at Rastelli’s for a traditional Italian style ice cream.

There are two things which mark the crowning glory of Morecambe’s promenade. One is this fellow, inspired by the town, and an inspiration for one of J.D. Wetherspoon’s hostelries. Another is Oliver Hill’s Midland Hotel. The Eric Morecambe statue was unveiled in 1999 and takes pride of place near the clock tower. It has become a popular meeting point and, in today’s connected age, a good place for a selfie.

As for the Midland Hotel’s restoration, a tangible reminder of the town’s 1930s pomp, and of a self assured future. Typically for Morecambe, its restoration work wasn’t straightforward. The hotel opened in 2008, thanks to restoration by Urban Splash. Following the financial downturn, Urban Splash faced financial problems which delayed its projects. Its work along the central promenade wasn’t completed till 2010. Shortly after, the hotel was taken over by English Lakes, a locally based independent hotel chain.

Though people are returning to Morecambe, a lot of work is needed to get it back to its 1930s glory. None of it is neglected through the lack of wherewithal; funding sources are one problem. Most obviously, the triggering of Article 50 and Brexit means the loss of EU sources, such as the European Regional Development Fund and the Social Fund. One consequence of a post-EU Britain could be more spending cuts. The last thing Morecambe needs is more austerity measures.

Morecambe needs good levels of inward investment from public and private sources. The resort’s poverty levels could be unattractive to some retail chains. Public transport links need improvement, not only along its main corridor to Lancaster. Also to other parts of Lancashire by road and rail. Though the opening of the A683 Bay Gateway is a start for private motorists, its benefits should go beyond being a spur road to Heysham Harbour.

In our third and final part, we shall be looking at the state of public transport in Morecambe and surrounding area. Plus, where Morecambe stands – or rather, should stand – in relation to the Northern Powerhouse.