A new social club at Bower Fold or a new home for the ‘Bridge? 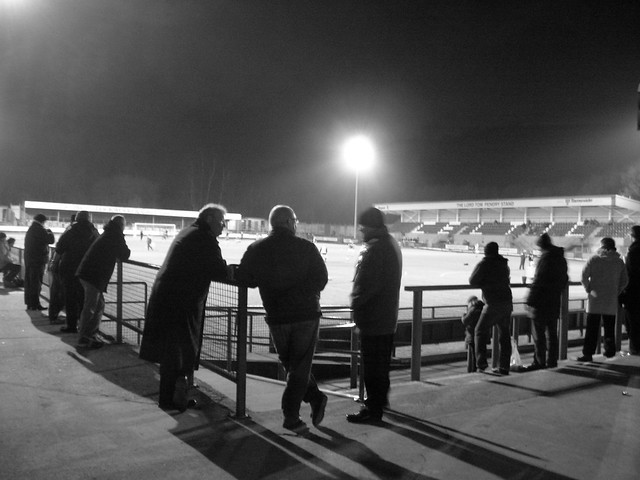 On Thursday (23 February), over a hundred people went to hear about Stalybridge Celtic’s vision for 2020 and beyond. In the packed social club at Bower Fold, Celtic chairman Rob Gorski outlined plans for the club’s future development. With some people having to stand up, the after effects of Storm Doris didn’t affect last night’s turnout.

In what is at this moment (on the pitch) a season to forget, yesterday’s announcement was one of optimism. One plan entailed the construction of a new two-storey social club on the Town End. Another plan was much more radical, again with a new social club.

A new home for Stalybridge Celtic?

The most radical plan is a new home for Stalybridge Celtic Football Club, in a more central location. Besides being a new home for the ‘Bridge, its ultimate goal would be the monetisation of the venue. Not for about four hours a fortnight on match days, but seven days a week.

Part of the plan could include a 4G synthetic pitch. This would be used by community groups, the first team for training and match days, and the junior teams, saving on pitch hire costs elsewhere in the borough.

Its central location is attractive for banqueting, conferences and private functions. This could be another revenue stream which also kills two birds with one stone. That of a first class banqueting suite with scope for conferences and community use. Also that of a new social club which could open outside of match days, without having to open the exit gates into the ground itself.

The proposed plan will be self financing. Another income stream will come from retail units. These could boost the town centre’s retail offerings as well as Stalybridge Celtic’s coffers. Come 2020, the ‘Bridge’s future home could be more intertwined with the town centre than in 1909.

As far back as 1923, Bower Fold’s out of town location was cited as a factor behind the club’s resignation from Football League Third Division North. The club resigned from the Football League due to low attendances (though their average of 4,000 was higher than Rochdale’s in the 1922-23 season).

The plans was met with surprise and excitement from those in attendance. Concerns were also raised about the future stadium; especially its character (based on less favourable experiences of modern venues). Plus the possible leasing terms and as to whether it would affect the club’s finances. Only 24 hours before the public meeting, Rob Gorski spoke to Tameside MBC leader, Councillor Kieran Quinn on the subject. This his first ever meeting with the leader.

Should the plans go beyond yesterday’s surgery and become reality, Bower Fold could see luxury houses. There could be a win-win scenario for Celtic with the future ground’s revenue streams. For Tameside MBC, another win-win scenario through higher Council Tax rates.

If the price is right for Rob and the greater good of Stalybridge Celtic Football Club, we could be seeing a change of home for the ‘Bridge. The projected venue’s public transport links could be second to none with local bus routes and the newly electrified Trans-Pennine route on its doorstep.

Or a new social club at Bower Fold?

Supposing the terms for its relocation are unfavourable, there is a fallback plan. The fallback plan entails retaining Bower Fold, though projected income streams are more limited. The alternative entails the construction of a new social club. This could be a two-storey structure (in place of the present temporary building on the Town End terracing) with banqueting facilities.

During the question and answer session, one of the audience members asked if taking over the Indian restaurant (formerly The Bower Club) was an option. Rob stated that its present guise was more profitable than moving the social club to its original site (in terms of rental income).

In the short term, a new social club and banqueting facilities at the Town End will be just as appealing as a new home. In the medium to long term, its out of town location limits the earning potential of the club. Would Bower Fold still be on a frequent bus route in 2020 (if Derbyshire County Council’s plans to cut subsidise routes affect the 237 service to Glossop)? Could future departmental cuts affect the tendered 387 service from Hyde to Ashton, which links Ridge Hill with Bower Fold? How much would it cost to upgrade the existing stands?

Overall, the public meeting was well received by its attendees (myself and my father included). On the fans’ forum, some negative reactions were posted early on. Later posts under the Announcement subject were favourable with a mix of excitement and realism.

In attendance, Mike Pavasovic (of the excellent Pav’s Patch blog) interviewed Rob and posted the interview online. Mark Philip, the Tameside Reporter’s Sports Editor covered the story, with the interview posted on Soundcloud.

Thursday’s meeting was only the first step of what could be an exciting glimpse of the future for Stalybridge Celtic. A Memorandum of Understanding needs to composed; details of the site need to confirmed. Everything shall be clearer by the close season.

Whatever happens, there could be a new social club at a future venue in Stalybridge town centre or at Bower Fold. From today, the hard work begins.

One thought on “Stalybridge Celtic’s 2020 Vision”