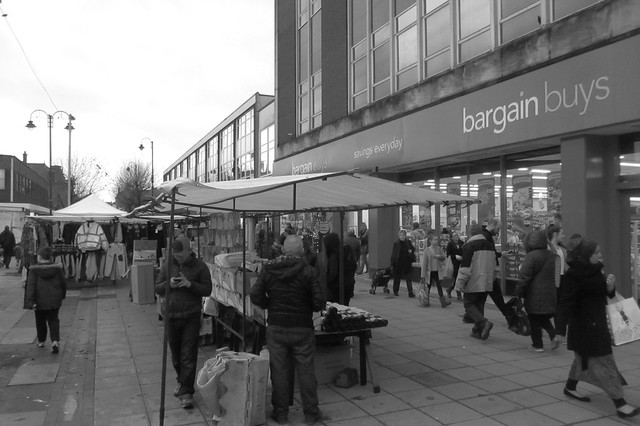 It’s beginning to look a lot like Christmas in our portion of Greater Manchester, but spending cuts have made for more modest displays of Christmas lights. Apart from that, it has been a busy old month.

END_OF_DOCUMENT_TOKEN_TO_BE_REPLACED

Do Yourself a Favour… Head to Raja Bros

The Ad of Christmas Past

How can we forget LiquorSave, the wines and spirits concession in many a Kwik Save supermarket from Aberdeen to Yeovil? The animated advert embodies Kwik Save’s mantra of “top brands at rock bottom prices”: cheap, cheerful, straight talking. One of the brands advertised (Hofmeister, a 4.1% lager at £1.79 for four cans) is no longer with us.

Sandeman Port at £4.29 in the ad is still available. The price of which has increased fourfold since 1985 (£15.99 from Waitrose). A lager of comparable strength to Hofmeister is £3.49 for four cans (Carling lager, from Tesco) – £6.98 if priced along similar lines to the port. Worse is the fact a pint of Carling in any pub can be £3.50 upwards. You wonder why the lower end of the market – working class (former) pub goers – have flocked to convenience stores like Raja Bros or Tesco Express!

The Shop of Christmas Past

Kwik Save was the 1980s equivalent to Aldi and Lidl minus the acclaim of the chattering classes or favourable reviews in The Guardian. For many working class people in Tameside, Kwik Save was about the best many could afford. The original chain started out in 1959 in Prestatyn, founded by Albert Gubay as Value Foods.

In 1964, a life-changing trip to US saw Mr Gubay adopt the model which led to its success. That of a no-frills approach with limited product lines, items stacked upon each other instead of shelves, and walk-through refrigerators. The store chain which also piqued his interest was Albrecht Discount, which many of you will know today as Aldi.

In 1967, his Colwyn Bay store was converted to Aldi’s style format and the rest they say… double physics. Growth came via acquisition with many sites using former cinemas. Its presence in the North West was bolstered by the acquisition of Savemore.

Kwik Save stood the test of time till Aldi’s arrival on UK shores. In 1998, after some market repositioning, came the chain’s acquisition by Somerfield. The original aim was to convert more of its stores to the Bristol based chain’s format. Only a handful were, such as Stalybridge’s branch on Leech Street in May 1999.

The alliance didn’t last. so Kwik Save was sold off in 2006 to a private equity group. This led to the original chain’s demise in 2007. There was plans to rebrand 56 of its stores as Fresh Xpress supermarkets which disappeared virtually without trace. By 2012, the Kwik Save name was resurrected by Costcutter. Today, a sure footed approach to store openings is taking place. The first branch under Costcutter’s ownership was opened in Little Lever.