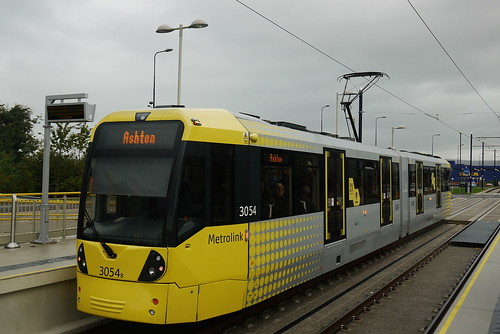 Even with the joys of Cornbrook Junction and the usual slow departure from Ashton-under-Lyne tram station, today saw Adham Fisher break his previous Metrolink record.

The international metro rider took six hours, 27 minutes and one second to complete his previous attempt. Today – with an expanded network – he completed his journey in five hours, 31 minutes and 31 seconds.

With 30% more stations than his last trip, he took 56 minutes and 29 seconds less to do the Metrolink system. Today’s system covers 92 stations and seven lines over 57 miles of standard gauge track. By 2020, we shall see the Second City Crossing and Trafford Park lines in operation.

His record breaking exploits will continue tomorrow. At Stockport railway station, he will DJ for seven hours with his Train Sets project. He will be witnessing a more legitimate record. This time, the longest distance conga – taking place on the same day between Piccadilly and Stockport.

Stockfest is raising money for Change The Lives, a charity which focuses on caring for abandoned children in Bangladesh. For more details about tomorrow’s venture, visit Stockfest’s Eventhint page.