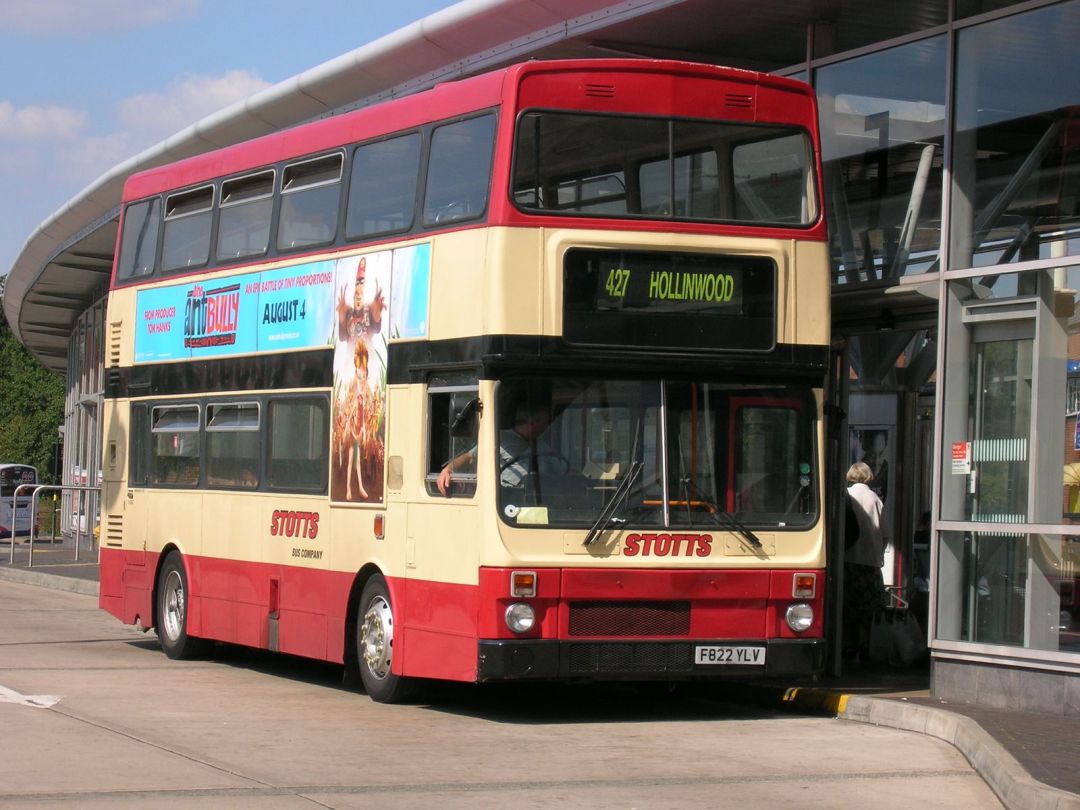 Bus Boarding Peeves: The Not So Perfect Ten

The lowlights of boarding your favourite bus route

Having focused on the things I have most missed about buses in the Greater Manchester area, this topic focuses on the things which nark me off the most.

Some of these are reasons which would force the motorist to walk to work if they were forced to give up their vehicle. Such incidents may well be the cause of plain bad manners, others may be operational issues. All of these could well make up the ultimate bus journey from Hell.

Prepare to meet thy bus… of doom.

With the tedium of some bus services, it is no surprise as to why some passengers carry a digital music player of their choosing. More often than not, the background noise is barely audible. Being able to listen to Supertramp on the 343 is now a most enjoyable experience thanks to such players – especially with a decent set of head/earphones – at a reasonable enough volume for your ears and fellow passengers.

For some, their choice of digital music player is a mobile phone. A mobile phone does not offer the same sound resolution as a properly encoded MP3 file, or enough memory to store a decent selection of albums. Some prefer to listen without earphones – at the chagrin of other passengers – and the music is (several times over) always some Hip-Hop artiste or some Happy Hardcore/sub-Scooter type outfit. Turn them off please, charge them performing rights – the PRS could land a windfall.

2. Passengers unwilling to give up their seats for fellow elderly or pregnant passengers

Worse still, the passenger playing That’s What I Call Hardcore may be unwilling to leave his/her seat for someone who needs it more. For example, pregnant passengers, the elderly and less able passengers. In the last 60 years, the front seat has been clearly marked for the use of such persons. The arrival of low floor buses have also made the front seats a preserve of persons carrying buggies, with ample space available for 2 pushchairs on average.

To those of the low floor bus loathing kind, you are insulting tomorrow’s potential bus users. For those of you unable to give up a seat, they have paid for their bus fares already. Oh, and think yourself lucky that the likelihood of you getting any seat on a bus is more likelier than finding one on a rush hour train.

They say worse things can happen at sea. Oh no, I think otherwise. Being on a bus with rowdy schoolchildren is an equally bad proposition. I have had the misfortune of boarding such services, through unfortunate coincidence. However, the type of schoolchildren you may get on a normal service bus is pot luck. My semi usual route has a well behaved set of passengers, which is a contrast to my past experiences.

Some time in November 2002, I was aboard a service which would normally take 22 minutes. Due to the amount of schoolchildren which boarded, it took 40 minutes for the 3 mile journey (I would have been better off walking). With the rowdiness, it seemed like an hour long journey. Just to make matters worse, it was a minibus packed to the gunwales.

The vehicle was more suited to a lightly used route. This leads me to another pet hate, in terms of inadequate vehicles. For example, this means: buses designed for short-medium local routes used on longer cross-town services (minibuses instead of single/double deckers); poor legroom on more modern vehicles; and inadequate luggage accommodation.

Fulfilling all three counts was a journey made on an 8 metre version of the Dennis Dart single decker bus from Newton Abbot to Brixham (some 15 miles). For the 70 minute journey, there was no luggage space (me and my Dad had to occupy a double seat each, to keep the suitcases away from the gangway) and awful legroom. Despite that, it was quicker than waiting 50 minutes for a train to Paignton, then walking to the bus station on the opposite side of the road, only to board the very same bus.

In my honest opinion, one of the main things which puts people off from using local bus services is the state of bus termini. From previous observation, I have found bus stations operated by Passenger Transport Executives/Authorities slightly more hospitable than those owned by companies or local councils. Despite this, the bus station is still the last place where any lone traveller would like to be seen in the evenings (me included). Services are fewer, thus meaning little or no staff, far fewer passengers and obviously longer waiting times. If the waiting time is less than 5 minutes, then I would stand in the bus station – albeit with a heavy heart. Even with CCTV, my nearest main bus station is still inhospitable. A pub nearby or the taxi rank is a better option.

Besides fearing for one’s safety, an equally annoying trend I have found in my area [Greater Manchester] is the use of bus station P.A. systems for transmitting annoying messages telling its customers not to smoke, use the wrong stands, or to keep an eye out for suspicious activities. In Ashton, I was ‘treated’ to four different announcements in a space of 15 minutes between leaving the 409 bus and boarding a 41 bus for home. The ‘Nanny State’ is alive and well outside The Prince of Orange.

It could be worse, I could have been waiting with a drunken passenger in no fit state to board the vehicle. According to the 1962 Road Traffic Act, the driver/conductor/guard can turn away any passenger deemed unfit to board the bus. Consumption of alcohol is also prohibited on any road transport.

Worse still, I could have been aboard with a Scooter listening front seat hogging schoolchild on a packed Optare Solo minibus (on a 5 miles plus journey) who boarded from a dingy bus station at 2230 hours driven to drink by a no smoking announcement in the midst of a long wait for another one because the vehicle had broken down 3 miles from home, who has been ignored by a passing driver selling weekly season tickets.

My earliest memory of being on a broken down bus was sometime in 1986, in the latter days of the Greater Manchester Transport era. I was aboard the 343 to Mossley, and the vehicle broke down near the Royal Oak. Luckily, a spare vehicle came within 10 minutes, outside the Friendship pub and a small betting shop. Me, my late Nana and 20 others walked to the other bus, no trouble at all.

My more recent recollections have been far from smooth. Last July, again on the 343, along with my Dad, I was on the way back from Brighouse, and the vehicle broke down at the half way point of the journey. A drive shaft fell out of the bus at Stanley Square, Stalybridge. Within five minutes, the driver asked my Dad if he had any idea what it was and knew straight away. Though we ended up walking the rest of the journey (the next bus was another hour away), the driver must have counted himself lucky to have an ex-mechanic as one of the passengers.

9. Being ignored at bus stops by passing drivers

Worse than finding your bus missing is finding that your desired bus decided to drive past and ignore you, despite waiting at the bus stop. Though I find this understandable if the bus is full, I consider this most infuriating if the vehicle is empty. Cheers mate for losing the potential revenue of two full fare paying adults and inconveniencing their leisure time without resorting to a taxi!

My final peeve is a more recent phenomenon, though one which could be both peevish and gratifying. That is the number of people buying single operator tickets on the bus.

Greater Manchester Transport was right to restrict weekly/monthly/annual passes to post offices and their Saver Sales outlets, as this reduced boarding times. However, it is worth noting that one man operation has done more to lengthen boarding times on busy routes, a factor exacerbated by on bus ticket sales.

On busy routes, passengers lose out with slow journeys in the peaks (mainly on Mondays and Tuesdays) due to persons renewing their weekly or monthly tickets. On some days and times, loading times can be quicker than say several years back when passengers fumbled for change to pay for single fares.

In a gratifying sense, it has made the purchase of weekly tickets even easier for regular passengers.

A great idea (at least in my honest opinion) should be the return of conductors on busy routes such as those on the Wilmslow Road, Ashton New Road and Ashton Old Road, and Stockport Road corridors. Imagine the difference this would have on the journey times.

You never know; if we still had conductors (or brought them back) our 50 Cent blaring mobile phone holding 20/20 drinking bus breakdown complainer, hacked off with mithering automatons, oft ignored at bus stops schoolchild with a weekly on-bus purchased season ticket on the front seat of a packed Dennis Dart from a dingy bus station in midnight may not exist.

Digitally Remastered on the 13 September 2021.

2 thoughts on “Bus Boarding Peeves: The Not So Perfect Ten”